On October 3, Los Angeles hosted a stop on the the Longines Masters series, which included signature event Charity Pro-Am Style & Competition. This event pairs up professional riders with amateur riders competing for charity. The eight participating teams, which included up-and-coming young equestrians Hannah Selleck (daughter of Tom) and Jennifer Gates (daughter of Bill), dressed in their choice of costumes while riding to music that accompanied their theme.

Actress Kaley Cuoco, best known for her role as Penny on “The Big Bang Theory,” teamed up with California-based trainer Tracey Wade. The pair dressed as Luke Sykwalker and Darth Vader to benefit Ride On. Jennifer Gates and Jack Towell wore costumes from The Wizard of Oz for Thrive Animal Rescue and Hannah Selleck and Jane Richard Philips wore Alice in Wonderland and Queen of Hearts costumes to benefit Longines and Just World International.

Cuoco, who recently joined the ranks of grand prix show jumpers, and Wade won the event, which was judged by actresses Denise Richards and Perrey Reeves as well as KTLA anchor Sam Rubin. The teams were judged on style and elegance, the horse’s style and the number of penalties over the fences. Kent Farrington and Alex Crown–dressed as gummy bears–were the fastest team.

Take a look at photos from the event:

Tell us which costume is your favorite in the comments. 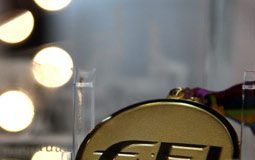 2018 FEI World Equestrian Games will be hosted in North America