The annual Macy’s Thanksgiving Day parade in New York City sparks lots of crowds. This year is no different, “with up to three million people” expected to attend, CBS News reports. Because of the recent attacks in Paris, the NYPD is increasing their security, making sure their presence is known. How? By placing police officers on horseback.

These mounted officers, sometimes referred to as “ten foot cops,” according to CBS News, have an advantage when it comes to emergencies. “Having that capability at a moment’s notice where you don’t have resources there yet, where you can start to evacuate people or give direction is invaluable,” NYPD Deputy Inspector Barry Gelbman told CBS News.

When a bomb was discovered in a parked vehicle in Times Square in 2010, the mounted unit worked quickly to evacuate the area. People took direction and communication was clear, Gelbman said, according to CBS News.

New York City is one of the last remaining U.S. cities to have police horses and last week the “NYPD unveiled a $30 million state-of-the-art facility to house the elite squad on Manhattan’s west side, just a quick trot away from Times Square, Penn Station and Central Park,” CBS News reports. 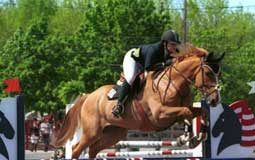