In 2006, what came to be known as the Great Netherlands Horse Rescue occurred. A strong storm had left the wilderness of Marrum, a small village in Friesland, Netherlands, full of sea water, causing a herd of at least 100 horses–some reports say up to 200 horses–to be trapped on a small area of land. They were there for three days, Elite Readers reports.

During that time 19 horses drowned; others became weak, due to the water and cold. Several rescues were attempted. However, a post on a horse forum asking for “experienced riders with horses without the fear of water,” resulted in the responses of several women. Norma Miedema, 40, led the rescue and she was the first one to answer the post, according to Elite Readers.

The group, which was comprised of seven women, met the next day to discuss how they were going to rescue the horses. These women rode horseback to the island and took the horses to higher ground. The last horse collapsed when it reached the shore, but was treated by veterinarians immediately.


As a result of the rescue, Miedema suffered from pneumonia, but she and none of the other women were willing to give up on the horses who needed rescuing. They were praised for their bravery in Marrum. 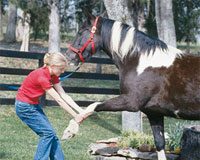 Overuse of Stretches Could Be Harmful to Horses