We’ve heard a few stories about owners searching for their missing horses. Now we hearing about a horse in Michigan who needs his owners found. The horse was found attempting to break through a fence apparently trying to reach a mare. The residents of the home contacted animal control, who in turn contacted the mounted unit of the Muskegon County Sheriff’s Office because the horse was behaving aggressively, Muskegon Chronicle reports.

Do you know this horse? Muskegon County officials looking for its owner: https://t.co/uNZkajINFZ pic.twitter.com/3BrXydYiuf

“He was just being a boy,” Sergeant Nancy Smith of the mounted unit told Muskegon Chronicle. Smith described the horse as “a bay and white paint/pinto stock-type stallion, 14.3 hands tall and about 5 years old…wearing a red halter.” She also said the horse is in good condition. He had burrs in his tail and mane and chipped hooves, but those were likely due to the surfaces he’d been traveling on. Smith added that “We don’t know where it came from. We don’t know how long it’s been running.”

The horse is currently being looked after by the mounted unit. Anyone with information about the horse’s owner should contact the Muskegon County Sheriff’s Office at (231) 724-6351 or Silent Observer at (231) 72-CRIME (27463). 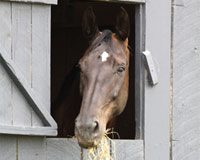