The Basin Fire Brigade (CFA) of Victoria, Australia, along with crews from Monbulk CFA, Knox SES and Macclesfield CFA’s Horse Rescue Team spent two and a half hours rescuing a horse who had slipped and fallen over in his horse trailer. The horse, named Stanley, had been unable to stand himself back up due to the position he landed in, The Basin Fire Brigade (CFA) posted on its Facebook page.

A local veterinarian from Yarra Ranges Animal Hospital attended to Stanley, administering a sedative so that the emergency crews could work on getting him out. Twenty emergency personnel manually removed Stanley by sliding a stretcher under the 13-year-old Gelding and then pulling him out of the trailer. Using a harness and crane, the emergency team helped Stanley stand back up. Besides being a little groggy from the sedative, Stanley walked away with only a few small cuts and bruises, The Basin Fire Brigade added in its post.

A veterinarian will arrive to check on Stanley tomorrow, 9 News reports. 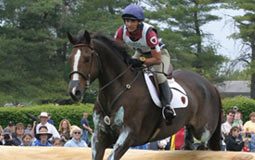 Enter for Your Chance to Win