He stands 15.3 hands and weighs about 1,000 pounds. He’s an American Paint Horse with a black base color and lots of white trim. He’s here to keep the people of Tempe, Arizona, safe. All he needs now is a name.

“Naytes Bravestruck” was donated to the Tempe Police Department in January, and while his APHA moniker is perfectly fine on registration papers, he needs something a bit less cumbersome to be called around the barn and on the beat. And so, the department is searching for the perfect name for the three-year-old gelding, who is currently in training to become part of the city’s mounted unit. The public is invited to submit name ideas via social media. The top three names will be selected by the department and put to a final vote. The person who suggests the winning name will be invited to visit the stables and meet the future equine officer.

According to the City of Tempe’s website, the current lineup of police horses is made up of Titan, Moose, Rex, Rio, Stryder and Thor, all geldings.

Tempe’s mounted unit started in 1974 and are currently an important part of law enforcement in the city’s parks, neighborhoods, and entertainment districts. Officers in the program complete 120 hours of training in subjects including stable management, safety, equitation, tack and equipment, trailer operation, and more. The mounted unit is valued by many Tempe citizens, so much so that there are more civilians seeking to volunteer with the program than there are volunteer opportunities, according to this 2010 report.

If you’ve got the perfect nickname for this flashy future officer, send it to the Tempe Police Department via Facebook, Instagram or Twitter by April 13. Voting will open after the top names have been selected, and the final winner will be announced on April 28. Let us know what name you choose in the comments. 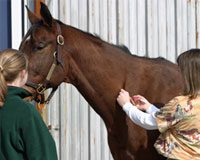