Fracking (hydraulic fracturing) is a controversial practice used to access natural gas wells. The process involves drilling down into the earth and injecting pressurized liquid–water, sand and various chemicals–to fracture the rock formations and allow the gas to flow.

The practice is controversial because of the high risks of water contamination, air pollution and even increased seismic activity. And on one Pennsylvania farm, it seems that it may have led to an epidemic of serious illness in newborn foals.

Allerage Farm, a Standardbred breeding farm in Pennsylvania near the New York state line, is owned by Jeff Gural, a real estate magnate and owner of several harness racing tracks. Over the last three years, foals born on his farm have had dysphagia, or difficulty swallowing. The condition is life-threatening as milk enters the foals’ lungs when they nurse instead of going to their stomach.

When symptoms arise, the foals are taken to Cornell University where veterinarians have been able to save 17 of the horses. The veterinary team there identified a neighboring fracking operation by Chesapeake Appalachia LLC as the likely cause of the ongoing illness. And it does appear that groundwater contamination is to blame, but an investigation by the Pennsylvania Department of Environmental Protection failed to pinpoint the gas well as the source of the contamination.

Under the law, fracking operations are allowed to withhold information about the specific chemicals they inject into the ground, which makes it nearly impossible to prove whether or not the gas wells are to blame when environmental problems occur.

“That they don’t have to tell you what chemicals they are using is ridiculous,” farm owner Gural told the Ithaca Journal. “I haven’t met a politician yet who thinks that’s a good idea. Yet it shows you what kind of lobby they [the gas and oil industry] have.” 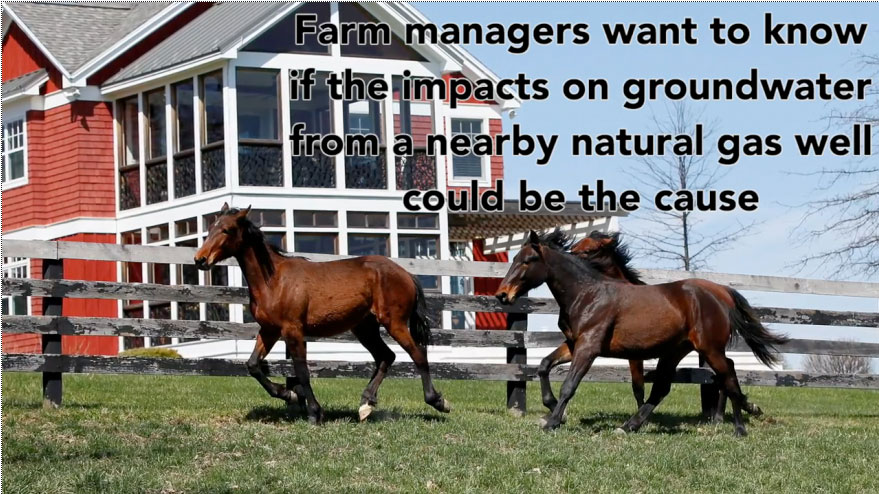 Gural also owns a second location of his Allerage Farm breeding operation in Eastern New York, near the Connecticut state line. His mares sometimes move from one location to the other, but all of the foals afflicted with dysphagia were born to mares who drank water at the Pennsylvania location while pregnant.

Nevertheless, Gural is a public supporter of the fracking industry, crediting it as a job creator and a force that has lowered the price of gas for consumers. He’s responding to the dysphagia epidemic on his farm by installing an extensive water filtration system at his Pennsylvania facility, and results are positive. Only two of the six horses born so far this year were sick compared with 11 out of 12 of last year’s foals. But Gural won’t know for sure that the filtration system is enough until next year’s foal crop arrives. In the meantime, the well-resourced farm owner pays $5,000 to $10,000 to treat each sick foal.