Home Horse News Don’t Get Back on the Horse

There’s a quote in the horse world of uncertain origin, though widely attributed to George Morris: “If you fall off, you either go to the hospital or you get back on.”

Like most equestrians, I’m not about to tell George Morris that he’s wrong. But researchers at Georgetown University might suggest that anyone subscribing to the “hospital or on” philosophy rethink their stance. 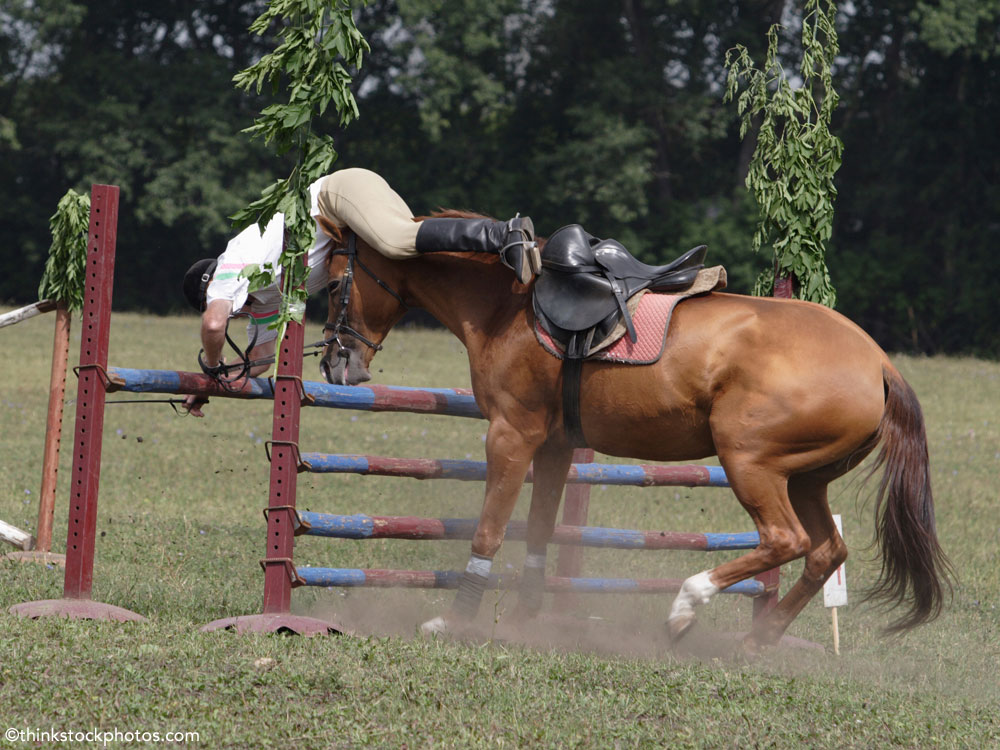 A study published in the March 2016 issue of the American Journal of Pathology sought to determine the effects of repetitive but very mild impacts on the brain. After one mild impact, it was found that the mice in the study lost 10-15 percent of neuronal connections (connections between brain cells.) However, the effect was temporary, and there was no inflammation or cell death. After three days of rest, neuronal connections were restored.

When mild concussions occurred daily, the recovery didn’t occur. In fact, the damage to the brain’s white matter became progressively worse, and persisted for a year after the last impact. However, if mice received multiple concussions with a week of rest in between, their brains were able to recover fully.

The takeaway is that concussions occurring less than a few days apart have the potential to be seriously harmful and do lasting damage, even if they’re mild. For equestrians, that means if you have a fall where you may have hit your head and are interested in preserving your brain power, your best bet is to lay low for a few days before risking another fall. (And while helmets can reduce the risk of catastrophic head injury, they don’t eliminate concussion risk.)


Of course, there are many reasons that the “get back on” philosophy is so ingrained in equestrian culture. Part of it is psychological: Some riders believe that it’s better to get back on and have a good experience in the saddle instead of ending on a fall and then being left to dwell on it.

There’s also a training impact. If the fall was caused by something the horse did, riders may feel compelled to get back up and work through the problem before calling it a day.

And sometimes it’s because your friends are watching. Or because you do as you’re told (by George Morris.)

Regardless, the Georgetown study provides good information that riders should know in case of a blow to the head—even a very mild one. What they do with that information is up to them.

Read more about research on equestrians and traumatic brain injury >>

Read more about riders and concussions in the Fit Rider column in the June 2016 issue of Horse Illustrated magazine.