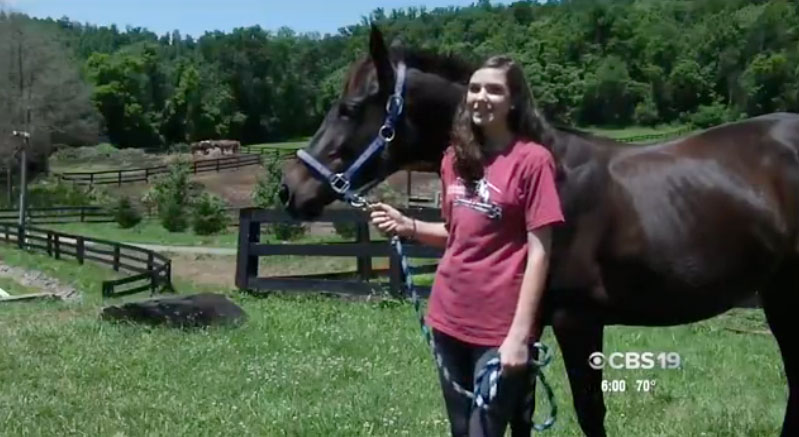 In October 2015, news of a massive rescue effort at Peaceable Farm in Virginia made national news. More than 80 horses were said to be at the farm, dozens suffering from neglect and several had already died of starvation when the rescue effort took place.

Now, more than eight months later, a local news station in Charlottesville, Virginia, shared the story of one of the Peaceable Farm horses who has made an incredible turnaround since last October.

Ariel is a dark bay mare who was found emaciated at the farm. In photos from the time of the rescue effort, her ribs are prominent through her dull coat. After being removed from Peaceable Farm, she and some of the other horses went to a rescue facility called Hope’s Legacy and was later adopted by North Garden Equestrian Center, a riding lesson and horse boarding facility in Virginia. NGEC adopted nine of the Peaceable Farm horses, and the farm’s horse-loving students from the lesson program have helped show these horses love and care.

Caleb Marden, co-owner of NGEC, explained to CBS19 how Ariel and the other rescue horses have taught invaluable lessons to the students who are helping to care for them.

Today, Ariel looks like a completely different horse. Her coat is shiny and her ribs are no longer visible. She’s become a beloved member of the NGEC family and living proof that a bit of kindness and care can go a long way.