Home Horse News Do Horse Herds Really Have a Leader?

The concept of a herd leader is solidly ingrained in equestrian culture. It’s a central point for many trainers’ and clinicians’ training methods: Be your horse’s leader. The image of one alpha stallion serving as king of the herd shows up everywhere from poetry to pop culture (see: Spirit: Stallion of the Cimarron). But is the idea of one strong leader and a bunch of followers really how equine life is structured? Researchers in France sought to find out in a study that was published in 2015 in the journal Plos One.

In this study, researchers specifically observed and recorded the way the herds moved from one foraging site to another or to natural shelters, including the “pre-departure behaviors” that occurred in the 20 minutes before the herd went on the move. For the purposes of the study, three behaviors are considered traits of a leader: departing first; walking in front travel position; and eliciting the other herd members to join. These behaviors have been used to designate leaders in previous research on various mammalian species.

The results of the study ran contrary to the idea of a single herd leader and suggested that decision-making might be more of a group effort in horses. The researchers noted that several different individuals from each group were found to initiate the herd’s movement and to walk at the front of the herd, and no individual was more efficient at eliciting the other members to join in a journey than any others. Based on this study, it appears that several different horses share the responsibilities of leadership during routine herd movement. The popular idea of either an adult stallion or a senior mare serving as the dominant leader did not hold up in this study.

This study only measured the behaviors during everyday maintenance travel, and the researchers note that leadership traits in an individual could appear under different circumstances, such as when the herd is fleeing predators. However, the study does provide some evidence to counter the longstanding, and possibly incorrect, human concept of leadership in horse herds. 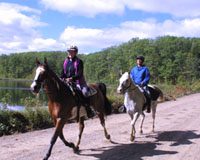