Unhandled, untrained and ungelded, seven blind Mustangs seemed headed for an unhappy ending before their arrival in Minnesota earlier this month. The stallions were among a group of more than 800 horses impounded from a ranch in South Dakota called the International Society for the Protection of Mustangs and Burros. The massive herd had been kept with no form of fertility control on just 650 overgrazed acres at what was supposed to be a wild horse sanctuary. A report by South Dakota’s Animal Industry Board filed after an investigation in September described horses starving and neglected with overgrown hooves. At least 25 horse carcasses were found during that investigation. Around the same time, an ISPMB employee went public with her own concerns about starving and dying horses at the ranch. Shortly after that, the horses were impounded.

You can read much more about the back story of the ISPMB in a three-part series published in the Rapid City Journal.

Most of the horses are currently under the care of the two counties in which the ranch is located. Ranch owner Karen Sussman may be able to get some of the horses back if she can present an acceptable plan for their care; so far, she has not been able to produce such a plan. In the meantime, some of the horses have gone on to other sanctuaries and groups that will care for them or facilitate adoptions into permanent homes. Among those removed from the ranch are the seven blind stallions who went to Minnesota.

This Old Horse is a sanctuary for senior horses located in Hastings, Minnesota. We recently profiled the organization here on HorseChannel.com. They made news this November for offering to provide a home for these seemingly unadoptable horses.

The ISPMB herd consists of horses from many different places. Some were Mustangs from outside the regions under Bureau of Land Management control. Others are said to be the descendants of everyday ranch horses released into the wild. According to This Old Horse, these seven stallions are part of the Gila band of Spanish Mustangs, originally brought to Sussman’s ranch from Arizona many years ago.

The stallions have lived most of their lives in a semi-wild state. They’re not even halter broke. But the staff at This Old Horse reports that they are gentle, curious and approachable. Despite the unstable conditions at their prior home, the stallions are said to be in fairly good health. But they are blind.

Nancy Turner, director of This Old Horse, told local ABC affiliate KSTP that they were working with their local veterinarians as well as researchers and students at the University of Minnesota to find out what could have caused blindness in this small band of stallions.

“We’d like to find out the real story,” said Turner. “Is it genetic? They fear that it’s toxicity—that there was toxic water where they were because they acquired the blindness. They weren’t born blind.”

According to the Hastings Star Gazette, University of Minnesota students will be providing thorough eye exams and blood tests for the stallions—and the horses will be gelded.

For now, the stallions have earned a permanent place in their new caretakers’ hearts. An event where the public will be able to meet the horses at This Old Horse is planned for December 10. Find out more, and view many more photos of the Mustangs, at thisoldhorse.org/mustangs. 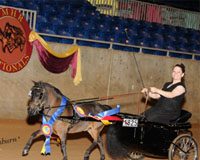