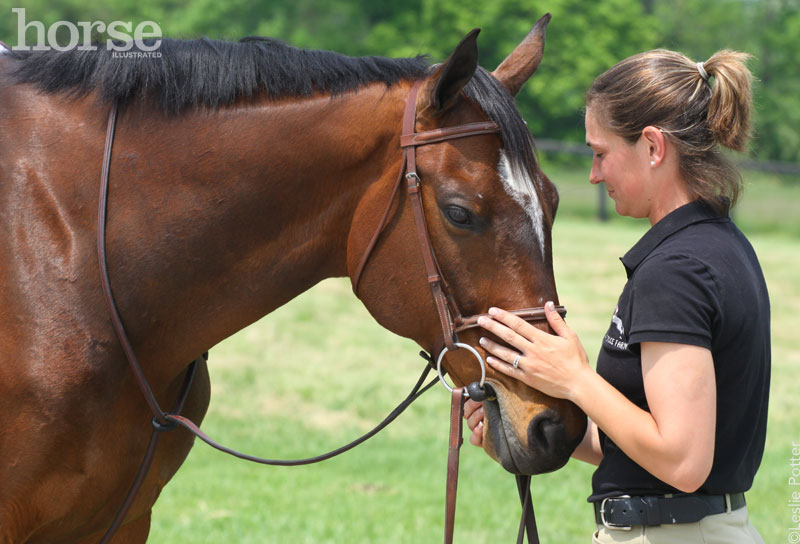 Have you ever had
the feeling that your horse is silently telling you to bring out the
treat jar for him? He very well may have done that, based on the
findings that researchers in Japan learned during a study that was
published last month in the journal Animal Cognition.

Using eight horses
from Kobe University’s equestrian club, researchers performed an
experiment to find out how horses would solve a problem that required
the help of their human caretakers. Sciencedaily.com explains how the
experiment took place. First, the researchers placed carrots in a
bucket inaccessible to the horses. Then, a human caretaker would
arrive. The researchers observed that the horses displayed certain
behaviors that could be interpreted as asking the human for help:
Standing near the human, looking at them, touching and even pushing
them. They did these things more frequently than in a control group
where no carrots were hidden.


For the second phase
of the experiment, researchers looked for differences in the way
horses interacted with caretakers who were present for the
carrot-hiding compared with those who had not been around to see it
happen. The horses sent more signals to the humans who had not been
present, which suggests that the horses do make a judgement on how
much they believe their caretaker knows, and alter their behavior
accordingly.


As with many
research studies done with horses, the sample size is small and the
findings are preliminary. Follow-up studies would be required to
learn more about the cognitive abilities in horses and how they
communicate—or attempt to communicate—with humans. However, there
is a logic to horses’ ability and willingness to communicate with
humans. During the domestication process, individuals that were more
inclined to interact and bond with humans may have been more likely
to be kept and selectively bred, and that could have created a
predisposition for communication with humans to modern equine
genetics.


Whatever the root of
horses’ willingness to communicate is, this research is a reminder
to listen to the signals your horse is sending you, even if he’s
just trying to say, “Hey, there are carrots in that bucket.”