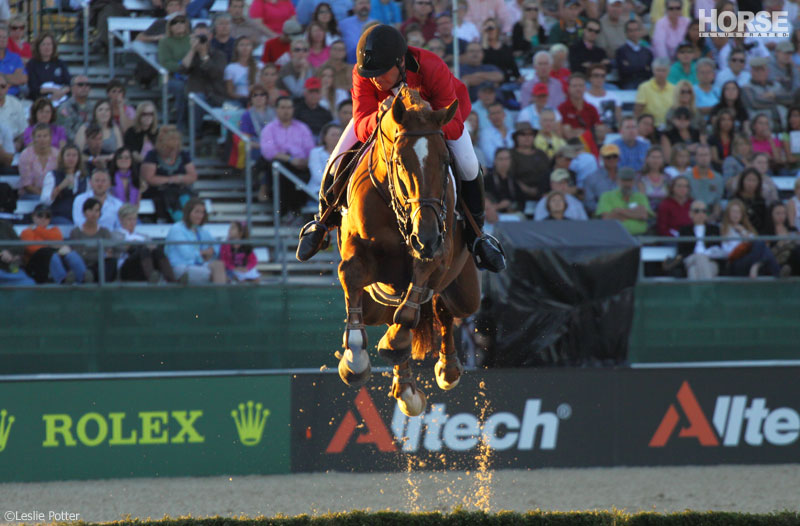 Philippe LeJeune of Belgium and Vigo d’Arsouilles clear the water en route to a gold-medal finish at the 2010 Alltech FEI World Equestrian Games.

Will the United States host two World Equestrian Games in a row, or will the 2022 WEG land in a new European location?

Lexington has hosted the event before, which could be a boon to its candidacy as it’s a proven choice with the documented ability to host all eight events at its Kentucky Horse Park. However, the WEG has never been held in the same city twice, which could work against Lexington if the federation prefers novelty. Additionally, the 2018 games are being held in the U.S., and with so many equestrian athletes based in Europe, there could be some push back on having two North American WEG in a row. Still, the Kentucky Horse Park’s existing infrastructure and long history of hosting large-scale equestrian events will certainly make it an appealing host.

Šamorín is a small town on the Danube river about 15 miles from Bratislava, the capital city of Slovakia. It’s a town of only 13,000, but it has positioned itself as a destination for major athletic events. Šamorín hosted the 2015 FEI European Endurance Championships and the 2016 Longines FEI World Endurance Championships at the equestrian center at x-bionic® sphere. That venue, established in May of 2016, has also hosted a Nations Cup CSIO3* Show Jumping Event and is home to other, non-equestrian athletic championships, including triathlons and cross-country running. The equestrian facilities include two indoor arenas and six outdoor riding rings, nearly 700 stalls and a racetrack.

FEI officials will complete site visits in the next few months. Representatives of the candidate cities will make their official presentations to the federation in the third quarter of 2017, and a final selection will be announced in November.

Hosting an event like the World Equestrian Games brings financial and logistical challenges for cities. For the 2018 games, Bromont, Quebec, had originally won the bid but had to back out due to a lack of financial support from the government. A similar situation occurred in 1998 when Dublin had to relinquish hosting duties just a year ahead of the games, which ended up going to Rome. In 1994, Paris had been awarded the games, but weren’t able to follow through, so the event went to The Hague in the Netherlands. While that year’s WEG did run as planned, it ended in bankruptcy.

The games are expensive. Although they will bring tourism dollars to the host cities, the initial cost of building infrastructure is prohibitive. The 2010 WEG in Lexington and the 2014 WEG in Normandy, France, both had the Kentucky-based company Alltech as a title sponsor. Alltech reportedly invested $30 million in the Lexington games and €10 million in Normandy, but no title sponsor has been announced for future WEG. With all of this in mind, Lexington and Šamorín, like the 2018 WEG host of Tryon, North Carolina, may be smart options since the exiting equestrian facilities will significantly reduce the initial investment to get the games off the ground.