Narcolepsy is a
condition that causes sufferers to occasionally fall asleep suddenly
during episodes that can occur at any time and without warning. It
can affect humans as well as other animal species, including horses.
One afflicted equine in England recently had an nearly tragic
experience as a result of a narcoleptic episode.

Molly, a 27-year-old
mare, fell into a three-foot ditch during an attack last week, and
couldn’t regain her footing in the soft mud that surrounded her.
According to Cheshire Fire and Rescue, the mud at the bottom of the
ditch was roughly four feet deep, which meant there was little hope
of Molly climbing out without assistance.

The rescue effort
took teamwork from a group of human helpers. A veterinarian sedated
Molly so that the rescue crew could outfit her with special equipment
to help lift her out. An area farmer used a digger to create a ramp
out of the ditch that served as a safe exit pathway. The rescuers
guided Molly out of the muddy trap, and once free, the aged horse lay
down in exhaustion. However, after about 10 minutes she was able to
get back on her feet, and her owner later reported that the mare was
doing well after recovering from her scary ordeal. 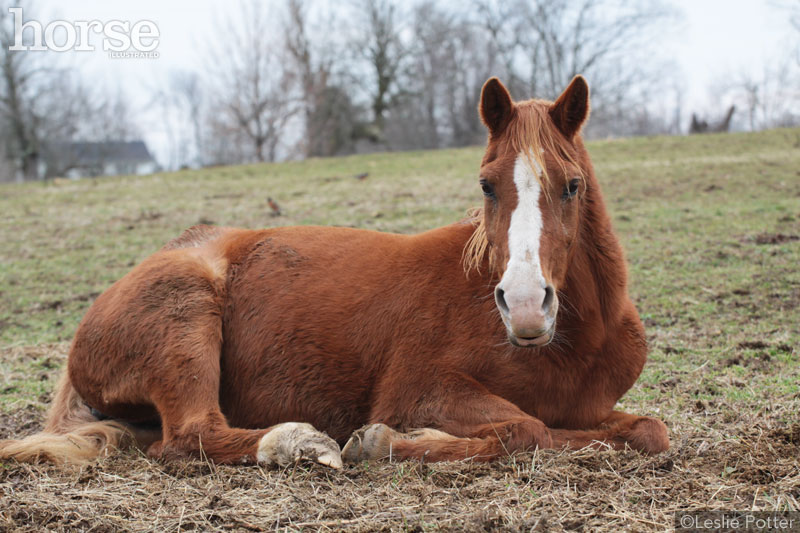 Horses need to be able to lie down and get sufficient sleep or they may experience symptoms of sleep deprivation, which can look a lot like narcolepsy.

In affected humans,
attacks of narcolepsy are often triggered by strong positive or
negative emotions. Similarly, attacks in dogs often occur during
excited play. In horses, however, there isn’t a known inciting
event that leads to an attack. While an episode can occur while the
horse is being ridden, they seem to be more likely to happen while
the horse is in turnout or in a stall. Often, horse owners first
notice something is wrong because the horse will have mysterious
wounds on his fetlocks caused by falls that the owner doesn’t see
happening.

Research presented
at the 2005 North American Veterinary Conference describes cataplexy,
or the sudden loss of muscle control, as the most common symptom of
narcolepsy, aside from excessive sleepiness. That loss of muscle
control could lead to an incident like Molly’s. In fact, the first
cases of equine narcolepsy were identified as “fainting” in
Suffolk foals in 1924.

Sometimes symptoms
of narcolepsy are actually signs of sleep deprivation. If a horse
feels unsafe or has physical difficulties lying down or getting back
up again, he may avoid lying down to sleep. Eventually, this will
lead to sleep deprivation and can cause collapsing that appears
similar to a narcoleptic episode. Seizure disorders can also be
mistaken for narcolepsy.

Narcolepsy can
affect horses of any age or breed, although certain bloodlines of
Suffolk, Shetland Ponies, and Miniature Horses may be predisposed to
it. Some foals have the condition but grow out of it. Adult-onset
narcolepsy has no cure and will usually persist throughout the
horse’s life. Because the condition is fairly rare in horses, it’s
important to work with your vet to get the correct diagnosis if your
horse is collapsing or seems lethargic as these symptoms can also
indicate other serious diseases or conditions.