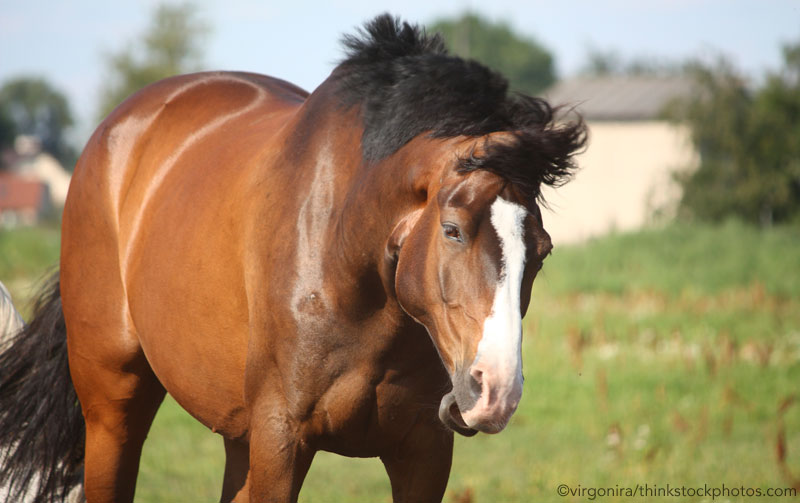 Sharon Macner described the behavior of her daughter’s beloved Paint, Hazel, to NBC 5 in Burlington Vermont. The pony had developed the symptoms shortly after Sharon and her daughter, Sophie, bought her. The behaviors, which also included throwing her head up and down with no apparent cause, became so severe that Sophie had to stop riding Hazel.

A veterinarian diagnosed Hazel with trigeminal neuralgia, a condition often associated with headshaking in horses. The trigeminal nerve runs along the face in both horses and humans, and this condition is found in both species. The condition causes sharp, shooting pains that typically don’t respond to standard pain killers. In affected humans, episodes of excruciating pain may result from even mild stimulation to the face—something as simple as smiling or brushing teeth can set it off. Horses are typically diagnosed when a vet administers a nerve block to the trigeminal nerve, which temporarily stops the pain.

There is no cure for trigeminal neuralgia. However, Hazel is the first horse to receive a treatment that vets—and the pony’s owners—hope will control the painful symptoms of this condition. Veterinarian Dr. Norm Ducharme at Cornell College of Veterinary Medicine performed a surgery to place an electrical stimulation unit in Hazel’s head. The device stimulates the trigeminal nerve, essentially doing the work that the damaged nerves cannot.

But the experimental procedure doesn’t end there. Sharon treats Hazel every other day, adjusting the settings and taking notes on how Hazel responds. Because Hazel is the first horse in the world to receive this treatment, there’s some trial and error involved.

Hazel isn’t cured. She still has symptoms. But she has good days, too, and Sophie has even been able to start riding her again. More horses will need to be treated so that veterinarians can determine what works and what doesn’t. For now, Hazel and other horses with her condition have some hope thanks to owners and veterinarians who cared enough to try to find a solution to a very challenging medical problem.