Polo is a physically
demanding sport for the horses involved, and for that reason, players
typically have a string of several ponies to rotate through a match.
Every rider wants to have the best horses for the game, and at the
top levels of the sport, that means finding six or more exceptional
equines. But for a rider with one great horse and some pretty deep
pockets, cloning is an option.

Argentine rider
Adolfo Cambiaso, one of the top-ranked polo players in the world, led
his team, La Dolfina, to victory at the Palermo Open last weekend in
Buenos Aires, and he did it riding just one horse, genetically
speaking. Cambiaso’s string consisted of six clones of his mare,
Dolfina Cuartetera, not-so-creatively named Cuartetera 01 through 06.

Cambiaso isn’t new
to the world of cloning. A 2013 news item from The Economist reported
that he had partnered with Crestview Genetics to create clones of
eight of his horses. Cloning isn’t cheap, but with the right horse
in a moneyed sport it might pay off; The Economist reported that one
of Cuartetera’s clones sold for $800,000 at auction at just three
months old, becoming the most expensive sale in the sport’s
history.

Cloning is a
controversial topic within the horse industry and in the world at
large. Some breeds and disciplines have explicitly banned clones from
competition. Thoroughbred racing, a sport where there are certainly
wealthy owners who would be quick to adopt the practice, does not
allow clones. In 2015, the American Quarter Horse Association won a legal
battle to keep cloned horses out of the breed’s registry, although
there’s nothing stopping owners from cloning Quarter Horses for use
in activities that don’t require registration. For example, a clone
of the legendary barrel racing gelding, Scamper, currently stands at
stud.

The Fédération
Equestre Internationale (FEI), which governs equestrian sports at the
international level—including the three Olympic
disciplines—announced in 2012 that cloned horses and their
offspring would not be barred from competition. So far, there have
been no clones competing in the Olympics, but there have been clones
made from some prominent Olympic stars, including show jumping’s
Gem Twist and Sapphire and eventing’s Tamarillo.

Controversy around
cloning goes beyond what it says in the rule books. In the early days
of cloning, when Dolly the sheep became the first successfully cloned
animal in 1996, there were concerns about the health of cloned
animals. Those concerns have mostly dissipated as the technology has
improved and healthy clones have been born and aged normally over the
years. Still, many horse owners have ethical concerns about cloning,
ranging from qualms around “playing God” to questions about
investing resources in cloning horses when there are so many
“unwanted” horses being neglected or shipped to slaughter. It’s
unlikely that these concerns will disappear any time soon.

But for riders like
Cambiaso, cloning is just one innovative way to keep a favorite horse
on the field. 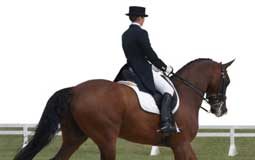