In a video making the rounds on social media and TV news this week, a horse takes on an alligator at a Florida state park. The gator appears to be minding his own business, but the horse decides the gator is too close to her herd—which includes a couple of foals—as they graze on the tall vegetation.

The horse kicks at the gator and goes in for a stomp. The gator reacts and there’s some tooth-to-leg contact, but both animals leave the scene to opposite sides of the trail and appear to be unharmed.

Krystal Berry, one of the visitors who caught the altercation on video, reported the incident to park officials and asked them to check on the animals. They told her that there were no signs of injury. 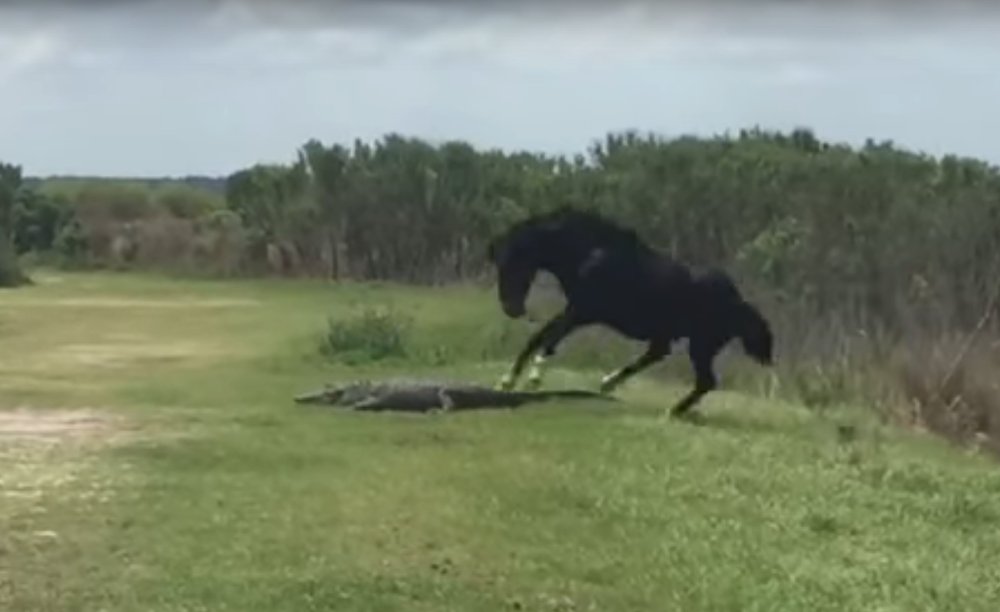 The horses were reintroduced to the park in 1985 to represent a part of the area’s heritage. The horses are feral and are “minimally managed,” with veterinary intervention only occurring when park managers see signs of illness or injury.

Population management is key, however, to maintain the herd population at a number that won’t overtax the available grazing or lead to horses expanding their range outside of the park and into developed areas. The Paynes Prairie Livestock Management Plan of 2011 recommends gelding or removing colts and stallions and using outside Cracker stallions to breed mares at the park’s Hickory Ranch to maintain the population. The herd size typically ranges from 10 to 30 animals.

Outside of this small feral herd, Florida Cracker Horses are used for pleasure riding and competition with their ranching heritage making them especially suited to working cattle. According to the Florida Cracker Horse Association, the horses typically range between 13.2 and 15.2 hands and perform various gaits, including running walk, trot, and ambling gaits.

The park is also home to roaming bison and a herd of reintroduced Florida Cracker cattle, which are listed as “critical” on the American Livestock Breeds Conservancy Conservation Priority List. The livestock are maintained at the park, which was a vast cattle ranch in the early days of the Spanish colonial period in Florida’s history.