Home Horse News Foal Born in Aftermath of Tennessee Tornado
On Wednesday, April 5, a tornado touched down in Shelbyville, Tennessee. Shelbyville is a hub of Tennessee Walking Horse breeding and training, and the storm hit just 200 yards from a breeding farm called Rising Star Ranch. 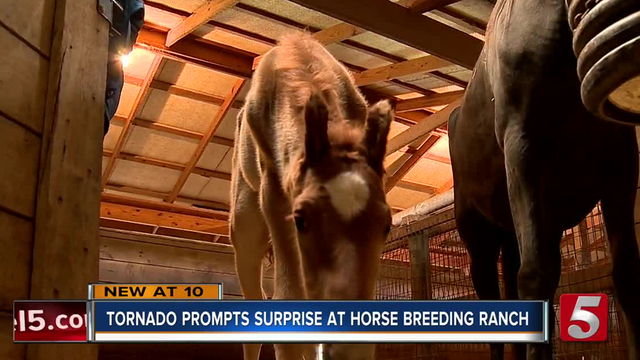 Breeding manager David Williams told News Channel 5 that he believes the change in air pressure helped induce labor and hopes that some of the other mares on the farm who are nearing their due dates will respond similarly after a tumultuous weather week.


The Shelbyville tornado was confirmed to have had a clockwise rotation, which is relatively uncommon in the northern hemisphere and is known as an anticyclonic tornado. The tornado was rated an EF-1, which denotes moderate damage. There are no known injuries as a result of this tornado, although one woman was injured by another tornado that touched down in Warren County, to the east of Shelbyville, during Wednesday’s severe weather.

Homes near the farm did have some damage due to the storms, but Rising Star Ranch was largely spared. More than 100 horses were on the ranch at the time that the tornado hit.


The mare who gave birth after the storm is called, appropriately, Rain Delay. Her colt is yet unnamed, but Williams suggested that it could end up being something weather related, like Storm Chaser.


Leslie Potter is a writer and photographer based in Lexington, Kentucky. www.lesliepotterphoto.com