Home Horse News From Police Horse to Therapy Horse
For more than 15 years, Harvest the police horse has been a popular sight in downtown Seattle. The towering Clydesdale/Quarter Horse mix, who stands taller than 17 hands, has patrolled the streets with officer Mark Wubbena since 2001, and he gathers new fans wherever he goes.

“Harvest is really popular,” Wubbena told local news station KING5. “I don’t know why it is. The face, the eyes. He’s so big, that’s what gets everybody.”

Harvest is a solidly built bay with a star and snip to accent his bright-eyed face. He loves wither scratches and reaches out with his front hooves when he’s groomed (“I don’t know why he does it. All I can figure is he needs to stretch,” says Wubbena.)

He’s made a lot of friends and fans downtown. Local business owners are so charmed by him that he received plenty of treats on his last day walking the beat. But walking the city streets isn’t an activity an aging horse can do forever, and so Harvest has retired from the force.

But the personable gelding will stay busy in his retirement.

Harvest recently relocated from the city to a 17-acre farm in the suburb of Redmond, Washington, where he’s the newest addition to Little Bit Therapeutic Riding Center. Once he’s had some transition time, he’ll go to work assisting children and adults with disabilities. The quiet, personable nature that made him a popular police horse also make him a good candidate for equine-assisted therapy.

Another benefit to Harvest’s new retirement vocation? He’s been reunited with an old buddy from the force, a Paint gelding named Blaze who also made the switch from police work to therapeutic riding nearly five years ago.

As for Officer Wubbena, after 16 years patrolling Seattle with Harvest, he says, “It’s been a great ride.” 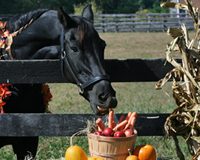