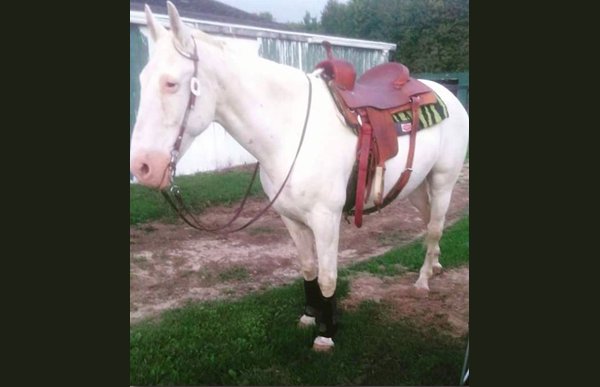 Moonshine is a well-mannered, 15-year-old Appaloosa gelding who lives in St. Clair County in Michigan. But on Tuesday, July 11, his behavior was unusual.

It started when his owner, Amanda Thorson, attempted to load him into the trailer to move him to a new farm. Trailer loading wasn’t usually an issue for Moonshine, but on this day, he refused. The new farm was just down the road, so Thorson and her friend, MJ Ross, opted to skip the trailer altogether. Ross rode Moonshine down the road while Thorson and another friend drove close behind.

But partway through the journey, Moonshine stopped. He refused to go forward and spun around in circles. Thorson turned off the engine and got out of the vehicle to find out what was going on with her normally laid-back horse. That’s when she heard a voice in the distance, calling for help.

Thorson told The Times Herald that they could see a man behind a nearby barn. She and Ross ran back there and saw that the man was pinned beneath a lawnmower. They called 911 and comforted the man until medical help arrived.

The man was Pastor Leonard Barney. According to a report from Detroit news station WXYZ, Pastor Barney was attempting to unload the lawnmower from the bed of a truck, when it rolled over on top of him. He called out for help, but there was no one around. He was stuck and alone for around 45 minutes before Moonshine and his people showed up.

“He said he was praying to God, and then God sent him a white horse,” said Thorson.

The pastor’s daughter-in-law, Melissa Barney, told The Times Herald that he is recovering in the hospital with fractures and puncture wounds.

“It was just amazing how God worked the whole situation out,” said Melissa Barney. “We have been laughing, though, since we found out what happened. Moonshine saved the pastor. What a sense of humor God has.”

My Horse is Afraid of Jump Decorations