Home Horse News Horse rescued after stepping through a wooden bridge
Yukon, a 12-year-old palomino, and his rider, Ashley Norman, are experienced in wilderness riding. They’re part of the Maine Mounted Search and Rescue Team, which helps find people who go missing in the state’s extensive trails and forests. But last weekend, it was Yukon who needed rescuing.

According to local news station WCSH6, Norman was out for a trail ride with Yukon on Sunday afternoon when they reached a wooden bridge over a stream. Norman could see that the bridge wasn’t safe for horses, but as she was looking around for an alternative route, a turkey flew out of the woods and spooked Yukon, who stepped on to the bridge. His feet slipped through the space between the boards of the bridge, and he couldn’t pull himself up.

Norman jumped off and called 911. First responders from the town of Hudson arrived to help free Yukon from his predicament, but by then he was so exhausted that he collapsed. Norman had been standing with Yukon, holding his head and trying to keep him calm, and when he fell, he landed on her leg.

Finally, with the help of veterinarian Tanja Ebel, DVM, the first responders were able to free Yukon from the bridge. Yukon was sedated, and firefighters used a chainsaw to cut the boards, according to an article in the Portland Press Herald. They’ve since patched the damaged bridge.


Yukon is said to be doing just fine. Norman sustained a broken leg when Yukon fell on her and is currently recovering in the hospital.

There is a positive development that resulted from this scary situation. Chris Lavoie, Fire Captain from the town of Hudson, told WCSH6 that his department would be working with Dr. Ebel to set up some large animal rescue training sessions. They plan to invite first responders from surrounding towns so that everyone can be more prepared for what is a rare but challenging scenario. 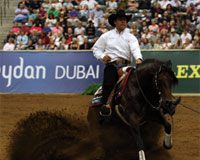