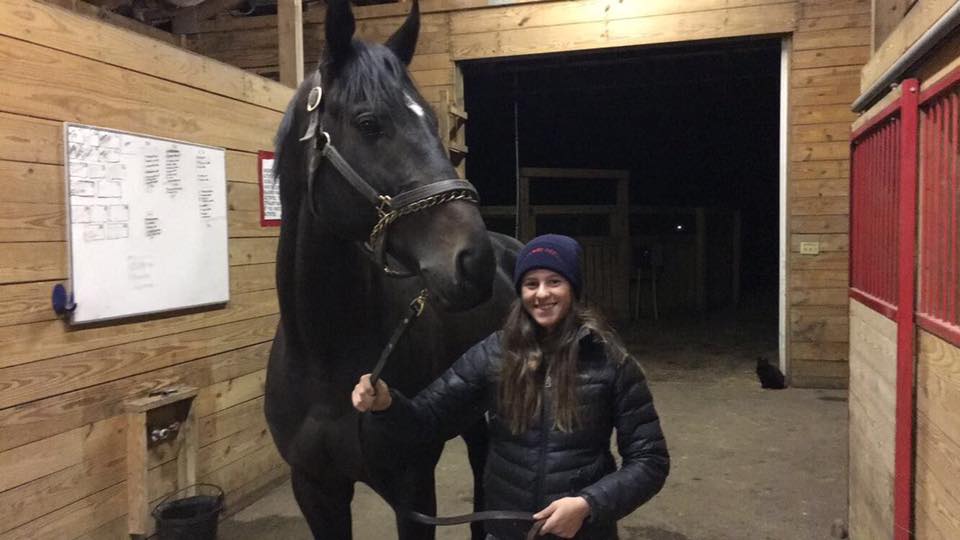 Cozmic One at de Sousa Stables. Photo via de Sousa Stables on Facebook
A career in show jumping probably wasn’t what his connections were dreaming about when Cozmic One was foaled in 2012. But the first foal of superstar racehorse Zenyatta (by leading sire and multiple graded stakes winner Bernardini) never found success on the track – he earned just $5,770 in five starts, never finishing better than fourth.

So now Cozmic One will embark on a new career in the hunter/jumper ring. Three-time Thoroughbred Makeover Show Jumping Champion Isabela de Sousa, 16, of Lexington, KY, and her family’s de Sousa Stables acquired the now-gelded 5-year-old from owners and breeders Jerry and Ann Moss and de Sousa plans to compete him at the 2018 Thoroughbred Makeover, held Oct. 4-7 at the Kentucky Horse Park in Lexington, KY.

“When we were looking for a horse [for the Makeover] last year, we thought of him and contacted his connections and they weren’t ready to retire him from racing at the time,” said de Sousa. “A couple months ago, my dad spoke to his connections during the yearling sales in Kentucky and inquired about him, and they called us saying he would be available. We’re very excited about him, not only because he’s out of Zenyatta, but also because our first Bernardini baby [2015 Makeover mount Dewey Square] was amazing too.”

Thoroughbreds are a family passion for the de Sousas. Sergio, Isabela’s father, is managing partner of Hidden Brook Farm in Paris, KY, and her mother, Dr. Karen Wolfsdorf, is a veterinarian at the Hagyard Equine Medical Institute’s McGee Fertility Center. Isabela and her sister Nathalie help retrain off-track Thoroughbreds on the family farm, with a focus on the hunter/jumper ring.

The family announced the acquisition of Cozmic One on their farm’s Facebook page on Dec. 19. The post garnered hundreds of reactions and shares in the first 24 hours, and the story was immediately picked up by the racing press.

Isabela de Sousa took the reaction in stride. “It’s been pretty overwhelming, but it just shows how many people like Zenyatta,” she said. “It would be great to see all those followers join RRP so they can continue cheering for horses they liked at the track.”

For now, “Coz” is enjoying some time off. De Sousa thinks he’ll make a great show jumper or hunter, or maybe an equitation horse, but plans to wait and see what the horse seems best suited for.

“He’s a really good-looking horse. He’s tall, dark and handsome. He’s got nice movement and he’s got a great eye,” she said. “We just thought we’d give him a shot and see what happens!”