Home Horse Riding Disciplines Horse Dressage Q & A with Dressage Champion and Author, Charlotte Dujardin
Charlotte Dujardin became an icon in her home country of Great Britain and around the world for her incredible dressage performances with the Dutch Warmblood gelding, Valegro. The pair hold world record scores at the international Grand Prix level. Dujardin became the first British dressage rider to win an Olympic medal when she won individual and team gold at the London games in 2012. She defended her Olympic title in 2016, bringing home individual gold from Rio.

Dujardin got her start as a horse-crazy kid from a middle class family. She spent her younger years riding show horses and ponies before making the switch to dressage as a teenager and joining trainer Carl Hester. She earned a role as a groom with Hester, ultimately leading to her partnership with a young up-and-coming horse named Valegro.

In her new book, The Girl on the Dancing Horse, Dujardin shares the story of her path from those early days riding ponies all the way to the Olympic spotlight with her horse of a lifetime.

Your autobiography The Girl on the Dancing Horse has just been released. It tells the tale of how you met Valegro, and how the two of you “made each other” into Olympic champions and international celebrities. How did it feel to lift the veil and share the personal side of your Cinderella story with the world? What did you find enjoyable about the book-writing process? What did you find to be difficult?

I really enjoyed the process but at the same time it was difficult because it takes a lot of energy to go back to your childhood and remember things, places, and dates—especially after a day of riding 11 horses and teaching!

You share details of some of the struggles you faced, both on a personal level and in your work with Valegro. What is one challenge you overcame that you feel is of particular value to readers?

I think just to not be too critical of yourself or pay too much attention to what others think about you.

What is your relationship with Valegro like now that he has retired from competition? How has it changed? How has it stayed the same?

It’s exactly the same! We enjoy ourselves just as much whether we are in the arena or hacking round the countryside. He’ll always be a large part of my every day.

In some ways, you’ve already reached the pinnacle of dressage sport. Going forward, what do you see for yourself? Do you feel ambition related to the same goals or are they new ones?


There are new goals as there are new horses, but I would love to attain a team place again and represent my country. The training is just as special to me though—forming a bond with a horse and growing the partnership every day.

What’s one lesson you hope readers learn from your book?

Work hard for your dreams. The world owes us nothing. We get out what we put in.

If The Girl on the Dancing Horse were to ever be made into a movie, which actress would play you?

I can’t say, but hopefully someone nice and respected as an actress!

If you were trapped on a desert island with a horse and a book, what breed of horse would it be and which book would you choose?

I would want to be there with Valegro and a copy of our book…so he can read about how special he is!

If you could do one thing on horseback that you haven’t yet done, what would it be?

Grand Prix show jumping…but I don’t “have the bottle” for it!

What is the quality you most like in a friend?

What is the quality you most like in a horse?

What is your greatest fear?

Not enjoying what I do, as right now, I couldn’t do anything else.

What is your greatest extravagance?

I’m not really an extravagant type. I like nice things but I’m not continually shopping. Buying my own house felt like a huge extravagance at the time, but I was proud to be in that position.

If you could change one thing about yourself, what would it be?

I don’t think there is any point in trying to change anything. Be happy with yourself and be open to learning.

What’s in your refrigerator at all times?

What is your idea of perfect happiness?

Home, friends, family, horses, and dogs. Quiet time with those I care about.

If you could have a conversation with one famous person, alive or dead, who would it be?

What is your motto? 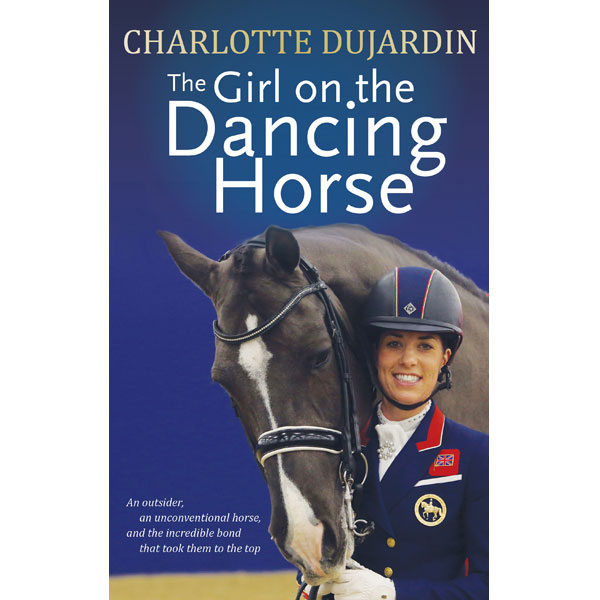 An Excerpt from The Girl on the Dancing Horse

In the build-up to big competitions my preparation never varies. It begins the night or morning before when I’ll watch a DVD of an old test or training session with Carl on my iPad so I can see where I’m weak and also get the feel in my body of what I need to be doing. Sometimes it’s only by seeing myself that I can completely understand what Carl has been telling me, plus hearing him screaming at me means that when I am on my own, what I need to do comes almost automatically because I can still hear his voice in my head.

Then the final hour or so before warming up I’ll spend with Ian in the lorry. Ian has got a playlist on his phone that we’ve put together over the years and we’ll have a little boogie together: the tunes are all sorts, but one of my favourites is ‘Everybody’s Free (To Wear Sunscreen)’ by Baz Luhrmann. I’d been at school when it came out and my best friend Kayleigh had been so obsessed with it she’d copied out all the lyrics, but it’s a philosophy I like too: don’t worry about the future, because worrying won’t get you anywhere. I’ve never seen the point in over-thinking things before competitions—it’s better to go in relaxed, with a clear mind. Then Ian pins my stock on, makes sure my hair isn’t a mess, and we’re off.

Get Your Horse on the Bit