The Arabian Horse Association (AHA) has named DA Al Capone+// (Ebony Masterpiece x Rabaska) owned by Cheryl Van Deusen of New Smyrna Beach, Fla., as its 2007 Distance Horse of the Year. In 2007, the 11-year-old purebred Arabian gelding logged 4,000 competitive miles in both endurance and competitive trail (CTR), with outstanding performances in each discipline. He had approximately 2,500 endurance miles from 50 and 100 mile competitions.

“I bred Alvin and he enjoyed life as a show horse, earning Region 12 Top Five honors in AAOTR Hunter Pleasure and reserve championships in working hunter and jumper, but it was not until we found distance that he excelled,” Van Deusen says. “He now competes at FEI 100 mile level rides with his best 100 mile time of 9:01 hours. His best 50 mile ride was done in 3:56.”

This is not the first time Alvin has been recognized for his achievements. He finished Top Ten at the 2003 AHA National CTR, was Grand Champion at the Florida three day 100 mile CTR, and collected two AHA reserve championships from Regions 12 and 8. Alvin racked up four Top Fives in Regions 12, 15 and 16 and, “wears his South East Distance Riding Association (SEDRA) High Point Arabian cooler proudly,” Van Deusen says.

Alvin has won a total of nine best conditions in his career. He is currently the No. 1 horse in the Southeast American Endurance Ride Conference (AERC) region and has won five of seven 50 mile rides. He earned a 2005 AHA National Top Ten and earned champion, reserve and multiple top five regional titles for 50 and 100 mile distances at regional rides.

As the winner of the Distance Horse of the Year Award, DA Al Capone+//’s name will be engraved on a perpetual trophy donated by the Arabian Horse Owners Foundation and designed by Joe Staheli. Van Deusen will receive an engraved plaque. 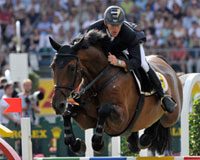