The reality series The Search for America’s Next Equestrian Star: Dressage will begin airing at 9 a.m. (EST), Oct. 19, on Fox Reality Channel. The show consists of five hour-long episodes that will air sequentially at the same time every Friday through the finale on Nov. 16.

The show was conceived by six-time Olympian Robert Dover and Brave St. Productions, a New York-based production company. In a nationwide search, hundreds of people sent in audition tapes for the chance to be selected as one of the final six contestants. In the series, the final six undergo a set of challenges and competitions that result in eliminations. The result is The Apprentice meets American Idol. The grand prize winner has the opportunity to become Robert Dover’s second assistant and the chance to train for the Olympics. Other prizes include an recreational vehicle supplied by Broward RV, tack from County Saddlery and much more.

The entire series was shot at Dover’s Romance Farm in Wellington, Fla., by Brave St. Productions.

“I believers viewers will find the show very engaging, whether they are horse people or not,” says Karin Reid Offield, executive producer of the show. “It is a chance to live with the contestants as they go through the trials Robert creates for them … not only how they perform, but how they react.”

“Each of these riders is not only gifted, but shares a passion for dressage that is reflected in their efforts on this show,” Robert Dover explains. “Each deserves credit for their performance; believe me, it was very difficult to choose only one winner!”

The show is a traditional mix of entertainment, reality, and competition that has been hugely popular across the network programming schedules and offers a “fly on the wall” view of the quest for the Olympic dream. The six lucky finalists are: 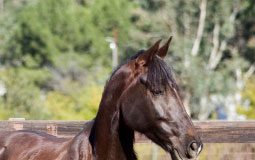