On Friday, the Federation Equestre Internationale (FEI) concluded that U.S. eventer Amy Tryon’s behavior at the end of the cross-country phase of the 2007 Rolex Lexington 4-Star Event on April 28 constituted abuse toward the horse she was competing on. As a result of the finding, Tryon was immediately suspended from competition through Sept. 19, 2007 and ordered to pay fines. On Sunday, the FEI reported that Tryon received official notification of the suspension and is waiving her right to appeal the decision.

On that fateful day in April, Le Samurai, the horse Tryon was riding, showed signs of lameness during the final moments of the Rolex course, but wasn’t pulled up until the last fence was jumped. As a result of the injury that was sustained, Le Samurai was later euthanized.

As a result of the suspension Amy Tryon released the following statement on July 20:
“I would like to express my appreciation to the Tribunal of the Federation Equestre Internationale (FEI) Judicial Committee for its consideration and determination in this matter. I am prepared to accept the Tribunal’s decision for the good of the sport. I would also like to thank my husband Greg, the Broussard family, Captain Mark Phillips, Karen O’Connor, and the hundreds of people that have written letters to me over the last two and a half months. Your support has helped to get me through this very difficult time. I also want to reiterate my unequivocal apology to the Tribunal, the FEI, the USEF, the Broussards, and eventers and horsepeople everywhere for the mistake I made during the cross country at the Lexington three-day event. I misperceived the situation and acted incorrectly. Had I known that Le Samurai was injured in any way, I would have pulled up immediately. In the sport of eventing, the welfare of the horse must be paramount at all times. I firmly believe in this principle, and to the extent that my actions on April 28, 2007 appeared inconsistent with it, I again want to express how truly sorry I am. Most importantly, I want to again express my devastation at having lost Sparky as a friend and a partner, and how much I miss him.” 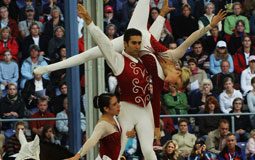