The Kentucky Horse Park museum announced yesterday that it will host a major international art exhibition on the Arabian horse, with the Saudi Arabian Equestrian Federation underwriting the entire $2.3 million in expenses to stage the exhibition.

A Gift from the Desert: The Art, History and Culture of the Arabian Horse will be showcased in the museum during the 2010 Alltech FEI World Equestrian Games beginning in July 2010 through October.
The Saudi Arabian Equestrian Federation is an agency of the Saudi government.

The 9,000-square-foot exhibit will contain 350 artifacts and paintings. Items will be solicited from major museums around the world such as The State Hermitage Museum in St. Petersburg, Russia; The Louvre Museum in Paris and The British Museum in London, plus academic institutions and European and American private collections. A Gift from the Desert will also highlight the significance of horses in the Near East and will feature Arabians’ impact on the creation of other breeds, including the Thoroughbred.
Members of the Saudi royal family, as well as royalty from throughout that region, are expected to attend the exhibit’s opening.
For more information, visit www.kyhorsepark.com. 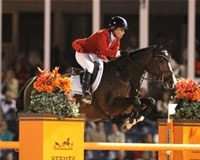