Newly-elected Phoenix city councilwoman Thelda Williams said her first item of business is to make the sport of horse tripping illegal in Phoenix.

Horse tripping is often the focus of charreadas, or Mexican rodeos. Williams explains that participants in the sport have the horses gallop around a rodeo arena and then pull wires to trip the animals. Horse tripping can also involve competitors chasing a horse and roping it by its legs, causing it to crash to the ground. Williams says the downed horses are often left with broken legs and necks and many have to be euthanized.

Animal welfare organizations have long criticized horse tripping. Such groups want to see the sport outlawed in all states, and they want to see offenders punished as felons.

Horse tripping has been banned in a handful of states, including California, Maine, New Mexico, and Texas, but it is classified as a misdemeanor.

Williams said she first learned of the practice while working with Arizona’s Maricopa County sheriff’s office last summer. “I don’t understand the entertainment or the sport of it all because all they’re doing is maiming and killing horses, but it is considered a part of a rodeo and I want it stopped,” she said. 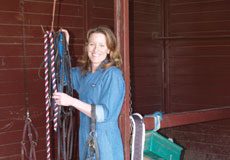 Cover Up in Style