Seventeen riders from 15 countries competed in this fourth World Reining Masters event, which came down to a runoff between Kronsteiner and U.S. riders Casey Hinton on Mr Boomerjac and Gabe Hutchins on Juiced Up Doc.

First up in the runoff was Hinton, who scored a 222 on Mr Boomerjac; Hutchins went second on Juiced Up Doc marking a 211.5. Finally, Kronsteiner and Smart Spook took their turn and gave the judges a near flawless performance, marking a score of 227.

With the win, Kronsteiner became the first person outside of the United States to win the gold in the FEI World Reining Masters open division.

“It’s just incredible,” Kronsteiner said. “I’m really proud for my country. We are really small with maybe 7 million people, and we have only about 300 NRHA members. For my country and for me, this means a lot.”

Kronsteiner was the only rider at the event who has competed in all four FEI World Reining Masters. He began competing in reining 10 years ago and has NRHA lifetime earnings of $309,872.

Smart Spook is by Smart Chic Olena and out of Sugarplum Spook by Grays Starlight. NRHA $3 million rider Shawn Flarida rode the stallion to the 2004 NRHA Futurity open championship, 2005 NRHA Derby open championship and the 2005 AQHA junior reining championship. Before tonight’s event, he had NRHA lifetime earnings of $272,455.
Reining is the only western discipline to be recognized by the FEI. 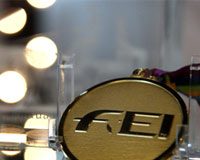