Baloubet Du Rouet, the legendary chestnut stallion that took Rodrigo Pessoa to every major showjumping venue in the world, including two Olympic Games, has been retired from sport. Many consider the fiery 19-year-old Selle Francais, who has always been owned by Diogo Pereira Coutinho, to be one of the greatest showjumping champions in history.

Baloubet Du Rouet started training with Nelson Pessoa, Rodrigo’s father, as a 5-year-old. The senior Pessoa rode him for four years and won several championships with him.
“At first he was a bit difficult, as many horses which have no discipline from the start,” the senior Pessoa said of Baloubet Du Rouet. “He hadn’t been well prepared so he gave us some troubles. But at 7 he was French champion with me. We won some grand prix’s when he was 8, and at 9 we did the World Championship in Rome. After that, he was passed to Rodrigo and is a horse that has won competitions in all countries.”

It was under Rodrigo’s guidance that Baloubet Du Rouet became a real showjumping champion. Among a long list of achievements, the Brazilian Rodrigo and Baloubet Du Rouet captured Team Bronze during the 2000 Sydney Olympics and Individual Gold in the 2004 Athens Olympics Games. The pair also won the International Equestrian Federation (FEI) show jumping World Cup a record three times–in 1998, 1999 and 2000, and took the top spot at the Las Vegas World Invitational grand prix in 2005.

Baloubet Du Rouet has sired a number of progeny–including Balou Grande Z (winner of the 30-day stallion test in 2002 at Neustadt-Dosse) and Balou Du Rouet.

“…Impressive power, respect and potency … but lots of temper …These are his qualities,” Nelson Pessoa has said of Baloubet Du Rouet. “His strength and respect are very peculiar indeed.” 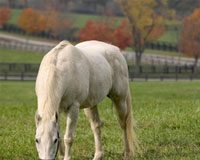 The value of fat in a horse’s diet