Have you ever wondered how manufacturers of riding apparel and equipment come up with their designs? Often they enlist input from successful, reliable competitors who demand reliable products. In that tradition, Ariat International has announced that Georgina Bloomberg, one of the most successful equestrians currently competing on the Grand Prix circuit, will act as a product development consultant for the company. At 24 years old, Bloomberg has an impressive list of equestrian accomplishments on her résumé, including having been a member of the U.S. Show Jumping Team at the 2005 Samsung Super League at La Baule, France. Bloomberg also took the individual gold medal at the 2003 North American Young Riders’ Championships.

Bloomberg is recognized for her equestrian accomplishments, but is also known for her willingness to be an ambassador for the sport. In 2006 she founded The Rider’s Closet, a charity that distributes gently used riding clothes to competitors who can’t afford the necessary but pricey garments. Georgina Bloomberg is a student at NYU, where she is studying art and sports management. She says that her alliance with Ariat will allow her to combine two passions: horses and fashion design. Bloomberg plans to compete for a spot on the roster for the 2008 Beijing Olympics. 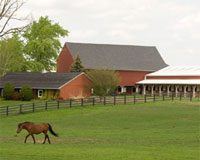