With much of Southern California under a Red Flag warning due to drought conditions and wind gusts up to 90 mph, brush fires are burning throughout Los Angeles, San Diego, Orange County, Riverside, San Bernardino, Santa Barbara and Ventura counties, threatening structures and prompting evacuations. As a result of the strong winds, overhead aircraft have only been deployed to battle the fires when Mother Nature permits, which has hampered containment efforts. More than 40,000 acres have burned as of Monday morning, prompting Gov. Arnold Schwarzengger to declare a state of emergency in the affected counties.

The state’s canyons and passes have been hardest hit, leaving California horse owners who live in these areas on high alert, as many are being forced to evacuate and some have already suffered losses. Several reports had horses dying in large numbers throughout the rural regions.

The fire overtook the Golden Eagle Farm, a large ranch situated in East County San Diego, before stable hands could begin an evacuation, according to the NBC television station 7/39. It was unclear how many horses were killed. The ranch, famous for its Thoroughbred racehorses, including the highest-earning racehorse in California history, Best Pal, who is buried at the ranch alongside his famous sire, Habitony, is a landmark in the area.

The state humane society is assisting horse owners in some areas of San Diego by helping with evacuations and setting up shelters.

Owners of horses and large animals in Topanga Canyon, just northwest of Los Angeles, were ordered Sunday to evacuate their animals immediately. Residents there are being affected by a wildfire that began Sunday morning in the hills above Malibu. Horses were being taken to a local community college. People in the area who are in need of evacuation assistance with their horses can call (818) 991-6384. Deputy Director of Los Angeles Animal Control Michelle Roache says the lines are flooded with calls, so she is urging people to use the hotline for emergency rescues only.

The hills of Orange County, Calif., are ablaze, with more than 4,000 acres burning, and arson is suspected. “I’m sad to report this is an arson fire,” said Orange County Fire Authority Chief Chip Prather. Prather appealed to anyone with information about this case or any suspected arson activity to call the arson tip line at (800) 540-8282. The area is home to many horse owners and several boarding facilities. Attempts to contact the facilities Monday morning were unsuccessful.
State officials are urging horse owners to stay on high alert and have evacuation plans in place. If an evacuation is ordered, officials say residents must leave … with or without their animals. 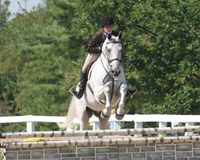 Rescue Horses in the Show Arena