A bill (HB 305) that would require children under 16 to wear a safety helmet in Florida while riding a horse on public trails and roads passed the state’s House of Representatives on April 30. While Senate passage is still needed to make the bill law, the parents of Nicole Hornstein look forward to the day all young equestrians wear helmets. Their daughter, Nicole, a 12-year-old from Palm Beach County, Fla., died in 2006 after being thrown from a horse she was riding. She hit her head on pavement and was in a coma for 20 days before she died. She was not wearing a helmet. HB 305 is named after her.

Bill sponsor Representative Shelley Vana says there are hundreds of head and brain injuries each year as a result of horseback riding and she hopes the bill raises the awareness of parents about that fact.

Under the proposed legislation, any person who allowed a child to ride a horse without a helmet would be fined $500. Some Florida cities including Davie, Parkland and Plantation already have laws that require minors to wear helmets when riding. 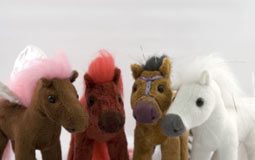