Twenty-eight-year-old Californian Liz Halliday is a unique sportswoman who likes taking risks. Not only is she pursuing her dream of becoming an Olympic-level three-day eventer, she’s also a racecar driver who competes internationally in Sportscar and GT endurance racing.

On the equestrian side of things, Halliday currently has three horses that she competes. She’s training hard to achieve her Olympic aspirations, but it’s tough to balance two demanding sports.

“Everyone tells me that I am mad to have this twin sporting focus in my life, but I find that one complements the other. The cars demand focus, accuracy and strength. In eventing, it’s the same. But the horse, as well as the rider, must possess these attributes in order for the two to work as a successful partnership.”

For all her bravado, Halliday is taking a temporary break from both sports right now. While competing in a three-day event this past July, she broke her collarbone. Although she still has at least another month of lay-up before she can return to the cockpit, she has already returned to the saddle.

“I’m back riding again, but the doctors have informed me that I’m still some way off from returning to a race car,” Halliday says. “I’ve had the operation to remove the metal nail that the surgeon inserted to help the bone heal properly, and that has allowed me to resume my physical training and also do some riding.

“I’m taking things slowly at the moment,” Halliday continues. But her idea of slow is different from most people. “I do have a couple of low-key dressage and show jumping events planned before the end of the year and then I should be ready to get back behind the wheel of a race car with some testing after Christmas.”

To keep up with Liz’s career, visit www.lizhalliday.com. 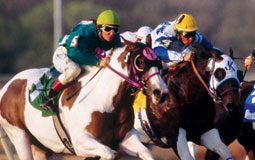 Spots on the Racetrack