But the situation in the region is far from over.

Fires continue to burn and full containment on the larger blazes is not expected until Nov. 5. Many areas are still affected by evacuation orders, particularly the inland regions where horse populations are higher. Additionally, property destruction has forced many people and their animals to be displaced for months to come.

Sadly, as some fire damage assessment gets underway, equine losses are mounting. Welfare checks on animals left in their homes will continue throughout the San Diego region this weekend. Volunteers and staff lead by the Humane Society are feeding and watering animals throughout San Diego’s East County. Horses that were left behind are being treated for burns and smoke inhalation. The Humane Society reports that many dead animals are in these areas, and a total count is in the process of being tallied.

Orange County’s horse loss numbers are also expected to be tallied as soon as possible, but as of Friday morning equestrians affected by the Santiago fire were still unable to access their properties due to continued evacuation orders in that area. Fire officials said they expect to begin contacting families who lost their homes and will allow escorted access as soon as possible. Most horses were safely evacuated from this region, but an unknown number were left behind. Several horses that made it to safety were being treated for smoke inhalation. The Santiago fire, which has blackened thousands of acres in Orange County, was threatening nearby Riverside County as of Friday morning.

For more information on the Southern California wildfires or to help those displaced by the fire, click here >> 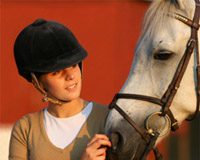 April is Prevention of Cruelty to Animals Month