Three of the nation’s top horsemen have been named as judges for the first Extreme Mustang Makeover, produced by the Mustang Heritage Foundation in cooperation with the Bureau of Land Management’s (BLM) Wild Horse and Burro program. Judges are Pete Kyle of Whitesboro, Texas, Suzy Jeane of Valley View, Texas and J.D. Yates of Pueblo, Colo.

One hundred individuals who adopted Mustangs from BLM facilities last month in Oklahoma and Nevada will compete for $25,000 as they demonstrate their mounts’ abilities during competition September 22. The Mustang extravaganza will be held at Will Rogers Memorial Center in Fort Worth, Texas. The newly trained Mustangs will be judged on their conditioning, groundwork and their skills negotiating a “horse course” that requires maneuvers and obstacles found in recreational riding situations. A BLM-sponsored wild horse adoption will take place the next day, when it is hoped inspired attendees will feel that a Mustang of their own is a worthwhile project.

The Mustang Heritage Foundation created the Extreme Mustang Makeover event to highlight the value of Mustangs. The Extreme Mustang Makeover will also become a six-episode series on RFD Television’s Wide World of Horses from August – December 2007. The show will share the stories of the Mustangs and trainers as they learn to trust in one another and gain competitive confidence. 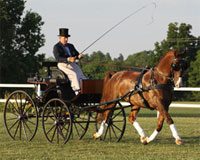