Even in the equestrian world, fashion trends come and go. And it may be time for one of the most recent trends to trot off into history. Glittery western belts blitzed out in bling are about to be branded a fashion misstatement. At least that’s the contention of Phil Lee, a territory manager for Ariat International.  According to Lee, the wide western belt that featured rows of bezel-set crystals, metal studs and an over-sized sparkling buckle have seen their heyday. And now it’s time for them to fade away.

“The newest trend will be to have a ‘blinged’ buckle,” he said, pointing to a buckle featuring inlaid Swarovski crystals, “but the belt itself will be much plainer.”

While consumers often think that manufacturers purposely start and end fashion trends just to spur the purchase of the latest and greatest item, Lee insists that’s not the case here. Consumers had simply stopped buying blinged belts. Part of that was due to the price tag.

“They were not inexpensive belts to produce, which resulted in a higher price point (sales price). So then, how many $90 belts can one person have? Once you have one or maybe two, that’s it.”

The inspiration for the blinged western belt was the famed Kippy belt, which burst into mainstream fashion almost a decade ago. Though an original Kippy belt cost several hundred dollars, the western wear manufacturers quickly duplicated the same look and soon western riding enthusiasts embraced the blinged belt. But so did hunter and jumper riders, who wore the fancy belts discreetly beneath their buttoned hunt coats, only to boldly display them when they ditched their hunt coats between events. It might be hard to bid farewell to such a well-loved staple of the horse world.

“Oh, if you go to NFR (the National Finals Rodeo held annually in Las Vegas), you’re still going to see the wild belts,” says Lee. “But for the most part, the newer look is going to be where the buckle has the sparkle, and it then becomes the focal point of the belt.”

And is there any advice for those who amassed a bucketful of blinged belts?

“Just like any fashion trend, eventually they’ll be back,” Lee said, laughing. “It may be 15 or 20 years, but one day they’ll be in style again. So my advice: Hang on to your blinged belts until then.”

Liked this article? Here are others you’ll enjoy:
How to Bling out Your Horse Safely
Battle of the Bling Heats up in English World 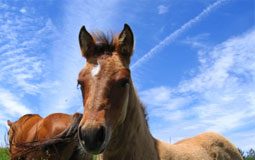