Home Horse News How Did Horseshoes Get so Lucky?

One of the most universal symbols related to horses is the horseshoe. It’s widely considered to bestow good luck. Why?

The reasons probably date back to prehistoric times when iron was thought to possess almost mythical qualities due to its strength for weaponry. Then, in medieval times, the forging of iron combined two of the most revered elements: earth (the raw form of iron) and fire (the forge). Items wrought from iron were seen as beneficial to mankind and inherently good.

As the horse took on importance to a more mobile society, so did the horseshoe. By 500 AD, iron shoes were nailed onto hooves to maintain the animal’s soundness. Blacksmithing became an esteemed profession, as it was the farrier who kept the horse able to work. Hence the horseshoe, the smithy’s foremost product, was associated with good fortune.

There’s one legend in particular that illustrates how horseshoes became associated with good favor. Although the details of the story vary, it’s said that an English bishop named Dunstan (909-988 AD) worked as a blacksmith before he became Archbishop of Canterbury. One night, the devil disguised as a beautiful woman came to tempt Dunstan. The astute Dunstan noticed a cloven foot beneath the devil’s dress, and thus realized he was being duped. He first grabbed the devil’s nose with his red hot pinchers and then proceeded to nail a horseshoe to the devil’s foot. Writhing in pain, the devil begged Dunstan to remove the horseshoe. Dunstan agreed, but only under one circumstance: the devil could never enter a house that had a horseshoe hung above its entrance.

Saint Dunstan became the patron saint of blacksmiths, and a horseshoe hung over a doorway continues to serve as a talisman against evil. In fact, in Great Britain a horseshoe is considered a traditional gift to brides on their wedding day. Usually covered in satin and lace and decorated with pearl beading and ribbons, a horseshoe is given to a bride as she leaves the church, with the assumption that she’ll hang it over the entrance to her new home. Even in modern times a horseshoe symbolizes good wishes for good luck. 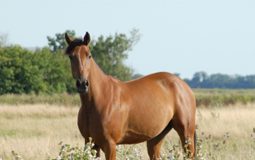