About 10 years ago, Linda Lyles faced a dilemma: She had a horse that craved treats. Being a typical discriminating horse mom, Lyles wasn’t happy with the array of commercially packaged horse goodies.

“All of the horse cookies just looked so hard and dry,” she recalls. “What I had in mind was something different, like buying fresh cookies from a bakery instead of a box of Oreos.”

So Lyles went to work in her kitchen, concocting her own batch of homemade horse cookies. She experimented with a few recipes, always using nutritious, fresh ingredients, until her horse confirmed that she’d whipped up a winner. She wrapped up some leftovers and handed them out to her barn buddies. Their horses loved them, too.

“I guess word of mouth spread,” she explains, noting that retail managers starting getting requests for her horse cookies. Soon her homemade horse cookies, wrapped up with a personal touch, were being sold locally in several tack stores near Los Angeles.

“At first they were just plain, wholesome treats,” Lyles says. “But then one day I came home from the barn and realized I still had some peppermint candies—another of my horse’s favorite treats—in my coat pocket. I was going to bake some horse cookies, and since it was close to Christmas, I stuck the candies on the cookies. I thought it made them look festive.”

“When I got home there was a message on my phone from the store. ‘We’re all of out of them. Can you bring more?’ I guess I’d hit on a great combination.” Lyles says.

Indeed, she had. That horse cookie recipe, topped off with a red and white striped peppermint, had an equine appeal that lasted far past the holidays. The first expansion of her business forced her to start baking her homemade treats out of a commercial oven in her garage.

Now, Linda Lyles and her husband Roger have moved north to Hanford, Calif., where they work alongside a handful of employees in a 2,500-square foot facility. The growth of Lyles’ horse cookie business, officially marketed as Paddock Cakes, has been phenomenal. Her trademark treats have even become popular first place award-winners at major horse shows.

To satisfy every horse’s palate, Lyles gave her imagination free rein. Cookies are topped with a variety of horse yummies including red and black licorice, cinnamon hearts and marshmallows.  She also bakes extra moist cakes which she calls “paddock pies.” What better way to celebrate a horse’s birthday?

“You can order the cakes off a menu,” Lyles says, “and we bake them fresh and send them by overnight mail or, if you’re across the country, via second-day air.”

The extensive menu looks and reads like that of a 1950s-era diner, which makes a visit to the website (www.paddockcakes.com) a treat in itself. Nearly just as sweet as her treats in her demeanor, Linda Lyles is the perfect example of how a horsewoman with a bit of creative inspiration—and a measure of talent in the kitchen—found a way to feed a niche market in the horse world. 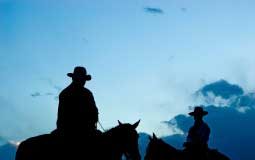