Trail riding is an opportunity to commune with nature while on the back of your favorite horse. Sometimes, however, the ride turns out to be far more adventurous than planned. We traveled to Hidden Valley Nature Preserve, a park in Riverside County, Calif., that borders an undeveloped expanse of the Santa Ana River. A popular site for equestrians, many riders were eager to share their most memorable trail rides.

Natalie Gass often brings along her three Australian Cattle Dogs when she rides. A few months ago she almost lost Piglet, who at 10 years old is the eldest of the trio.

“As I rode back toward my trailer, which was parked at the staging area, I noticed four coyotes shadowing me and my dogs,” she explains.

In a rush of movement, the coyotes pounced on Piglet and dragged her into a tributary of the river that was clogged with an overgrowth of brush and grass. There wasn’t much Gass could do. She was outmatched by the coyotes and overwhelmed with trying to handle her horse and the remaining dogs.

“I galloped back to my trailer, hopped off, tossed my two other dogs in the cab of my truck, climbed back on my horse and galloped back to where I thought Piglet was. The coyotes were gone. I kept yelling for my dog, calling, ‘Piglet! Piglet!’ And then, just as I pretty much figured she was dead, she came walking up out of the water. I was so happy to see her! I scooped her up, set her in the saddle and rode back to the trailer. Amazingly, other than being wet, she wasn’t hurt.”

Gass is now much more wary about coyotes on the trail. And she’s become more protective of Piglet, who is no longer allowed on certain rides. “Coyotes will usually try to pick off the weakest animal,” Gass acknowledges, “And that was Piglet.”

Cliff Hollingsworth hasn’t had a coyote encounter, but he was faced with another dilemma when his horse Shorty stumbled into a bog that was filled with quicksand.

“I scrambled off and undid the cinch and pulled the saddle off,” Hollingsworth says with noticeable emotion. He stood on the bank of the mucky pond and held Shorty’s reins, encouraging the horse to climb up and out. “But in a matter of minutes all that was visible was his head and neck.”

Because of the dense foliage and the wild environs of the park, there was little use in waving his arms to signal another rider or yelling for help. Instead, Hollingsworth coaxed Shorty into a Herculean effort to free himself.

“I was crouched down on the bank of the pond, holding the reins and pulling on them, just telling Shorty, ‘come on, you can do it!’ Finally he put his front hooves on the edge of the pond, kind of hooked them on there, and then made this one huge lunge. Right then it suddenly occurred to me that he might land on top of me.”

Fortunately, Shorty did not end up in Hollingsworth’s lap. He clambered up onto the dry, firm footing uninjured. “It was about a two hour struggle,” Hollingsworth recalls. “Needless to say, we avoid that area. But to this day it’s known out here as Shorty’s Pond.”

Have you experienced a particularly memorable day on the trail? Your adventure doesn’t have to include being tracked by coyotes or mired in mud. Whatever your trail riding tale might be, we’d like to read about it! Simply click on “share a comment” below and add your experience. Some of your comments may be included in an upcoming issue of Horse Illustrated magazine. 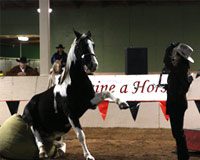