In 1972, Denise Boudrot Hopkins rode in her first horse race, one of thousands she would ride over the next 13 years.  She was a pioneer for female jockeys, at a time when there were very few of them at the track.  Horse trainers were reluctant to employ a female rider. They were considered the weaker sex. But that attitude changed with the Women’s Liberation movement. Hopkins, along with the other popular female riders of the 1970s, proved that she could also get to the track at 5 a.m., put in long, grueling, 18-hour days, and ride nine mounts a day. Plus, she won races: more than a thousand during her career.

“I don’t ride to beat the boys,” Hopkins said back then.  “I ride to win.”
To throngs of admirers from the stands, her winners paid off handsome purses.  Hopkins became the first female jockey to win a title at a major Thoroughbred track.

Though she’s no longer riding race horses, Hopkins is still working with horses. Now she’s hamming it up with her trick horse, Cleve Kadiddlehopper. The gifted horse was trained by well-known performer/trainer/clinician Carole Fletcher, who appropriately wrote a comedy skit for Hopkins titled, “The Reluctant Racehorse” which is a theme Hopkins was very familiar with.

On July 22, 2007, Hopkins returned back home, in a matter of speaking, to Suffolk Downs racetrack in Boston. But it wasn’t to ride in a race. It was to perform with her trick horse, to the delight of the crowds. 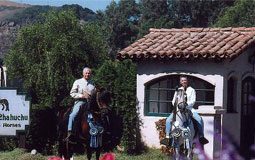