In yet the latest move to ensure the safety of horses and riders in the sport of eventing, a new concept of a yellow warning flag on cross country courses will be implemented on a trial basis at several cross-country tests in September 2007.

Stewards will be positioned (at stopping points or sector points) on the cross country course with a large yellow flag. If a ground jury member or other appointed official spots a rider who may be riding dangerously or is suspected of possible horse abuse, the member will signal the stewards to wave the yellow flag. The yellow flag would act as a warning to the rider. If the situation continued, the rider would be stopped from proceeding further by the waving of a red flag.
Per the Federation Equestre Internationale rules:

The yellow flag test is being implemented at the following three-day events next month:

The yellow flag procedure will be used as a trial basis at the above events, and the FEI committee will consider its use and practicality before including it in the Rules of Eventing.

This latest move by the FEI falls on the heels of the recent suspension of American three-day event rider Amy Tryon. She was suspended from the sport in July after the FEI found that her actions during the cross-country portion of the 2007 Kentucky Rolex Three-Day Event last April constituted horse abuse. The horse she was riding, Le Samurai, sustained an injury sometime before the last fence of the cross-country course, but Tryon didn’t pull up until she finished her round. Le Samurai was euthanized as a result of his injury. Tryon said she was unaware that the horse was hurt until she completed the course. Tryon’s suspension runs through Sept. 19.

Just weeks ago, on Aug. 4, 32-year-old German eventer Tina Richter-Vietor died after a tragic accident occurred during the cross-country phase of the CIC 2* Schenefeld in Germany. The FEI is still investigating the accident. 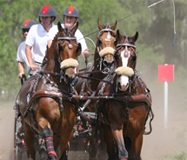