A year ago October, a yearling filly named Cowgirl Chic was brutally slashed and beaten to death in her pasture in the otherwise quiet town of College Station, Texas. Former Texas A&M student Kenneth Ryan Peterson, 22, was found guilty Oct. 18 of torturing the young show horse. During sentancing, Peterson admitted to being an alcoholic at the time, claiming he blacked out and doesn’t recall attacking the horse. However, two Texas A&M students who lived in Peterson’s apartment said he came home that night covered in blood and wielding a croquet mallet, bragging about going after the horse.

Peterson was sentenced to a total of 9 months in jail, 5 years of probation and some community service. He will also have to pay the filly’s owner restitution. 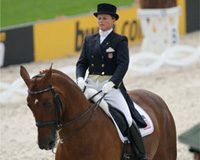