Officials foil horse-sent-as-a-dog attempt
Customs agents in Atlanta said nay to a person trying to smuggle a small horse inside a dog crate from Germany to Guatemala, from UPI. Read More >>

Queensland Govt To Offer Relief Amid Horse Flu Outbreak
The Queensland government in Australia has opened the public chequebook to the racing industry as it declared the horse flu crisis a “natural disaster”, from Yahoo. Read More >>


US Horse Flu Vaccine ‘Ready To Go’
A massive stockpile of horse flu vaccine is available for immediate shipment to Australia from the United States, but the federal government is yet to order it, Thoroughbred Breeders Australia says, from Virtual FormGuide. Read More >>

Horse Falls Into Open Trench, Dies
A horse died Tuesday after it fell into an open work trench that was dug by the City of Tulsa. The family that owns the horse is angry because the city dug the trench a couple of years ago and never filled it in, from KOTV. Read More >>

FEI statement on medication and doping control procedures
The FEI does not report the existence of a positive case until the earlier of the following: the results of an initial (“A”) test are accepted by the person responsible, or the results of a confirmatory (“B”) test also return a positive result, from the FEI. Read More >> 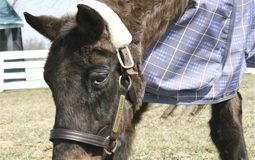