How horse flu has also hit humans
What wasn’t known when equine influenza hit in August was the emotional distress it would cause people who owned horses, from The Ararat Advertiser. Read more >>

Beshear’s inaugural parade to feature herd of horse units
The inauguration parade for Gov.-elect Steve Beshear and Lt. Gov.-elect Daniel Mongiardo on Dec. 11 will spotlight what Beshear calls Kentucky’s signature industry and most enduring symbol, the horse, from the Kentucky Lexington-Herald. Read more >>

HEISTED HORSE BACK IN SADDLE
“Stu,” the beloved plastic mascot of a Long Island stable, is safe and sound yesterday after a harrowing kidnapping by some rustlers, from the New York Post. Read more >> 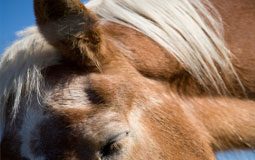