Wild horse adoptions at gather sites
Go to the source to pick out your own wild horse, from the Elko Daily Free Press. Read more >>

The King’s Troop must find a new home by 2012
Serving and former members of the UK’s foremost equestrian brigade — the King’s Troop — are concerned about the future of their company, as the lease will run out on their London barracks in 2012, from Horse and Hound. Read more >>

Horse stabbing mystery solved
A horse police believed to have been stabbed actually fell on a piece of concrete, a post mortem has found, from The Sydney Morning Herald. Read more >> 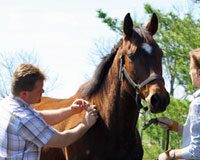 West Nile Virus: 10 Tips for Reducing the Risk at Your...