SPCA Finds Second Injured Horse
The SPCA of Monterey County, Calif., is looking for anyone that has information on “Ben,” an injured horse rescued Sunday by SPCA Humane Officers, from KION46. Read more >>

Plea deal accepted in horse neglect case
It was with a sense of resignation and frustration that a Gibson County, Ind., judge accepted a plea deal in the case of a man accused of neglecting at least 50 horses on his property, from the Evansville Courier & Press. Read more >>

HITS and Equine Medical Center Announce Leading Mare Award for the 2008 HITS Ocala Winter Circuit
HITS is pleased to announce that the Stallion Services Department of the Equine Medical Center of Ocala, FL, will offer the Leading Mare Award to the mare that finishes the highest in the $100,000 DeLuca Toyota Tundra Grand Prix, presented by Great American Insurance Group on Sunday, March 16, at HITS Ocala, from the USEF. Read more >>

Horse sense on frontiers
United States Border Patrol agent Galen Huffman leans over the saddle to look at faint tracks in a cattle trail leading up from the Mexico border, The New Zealand Herald. Read more >> 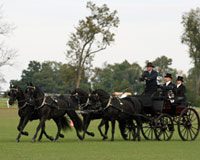