Cloning may be horse racing’s next horizon
Industry won’t embrace it, but some experts say it’s key to sport’s future, from MSNBC. Read more >>

Horse-slaughtering ban: Breeders fear for the horse population
“With all due respect, Congress is out of touch with reality,” said breeder Lynn Fischer of Wagner, South Dakota, from KOTATV. Read more >>

Richard Spooner Wins his 100th Career Grand Prix
The “100 Grand Prix Victory Club” welcomed its second member on Friday when Richard Spooner and his mare Ezrah captured the blue ribbon in the $25,000 Ariat Grand Prix at HITS Thermal, from the USEF. Read more >>

Rolex Grand Slam of Eventing Ups the Ante
$350,000 Purse to Any Rider Who Wins The Rolex Kentucky Three-Day Event, The Mitsubishi Motors Badminton Horse Trials and The Land Rover Burghley Horse Trials in Succession, from the USEF. Read more >>

Horse owner stands guard
A young horse that was shot in the head last week by someone who broke into her barn appears to be recovering, from SJ-R. Read more >>

Horse mutilated in Craig County
Their horse was found slashed and mutilated, now a Salem, Va., family is trying to find out who did that, from WDBJ7. Read more >>

Information on Tickets for the Equestrian Events of the 2008 Olympic Games
The International Equestrian Federation (FEI) is frequently being approached with questions on tickets for members of the public interested in attending the equestrian events of the Games of the XXIX Olympiad taking place in Hong Kong from August 9-21, 2008, from the USEF. Read more >> 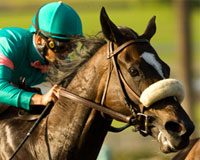