Horse Found Shot To Death In Lithia, Fla., Is Second In Month
A horse owner found his 2-year-old warmblood, Marvin, shot to death this morning on his property in Lithia, Hillsborough County Sheriff’s Office said, from TBO. Read more >>

McKenzie Co. seeking help for missing horse
The McKenzie County Sheriff’s Department is asking for help from witnesses or persons with information concerning a horse missing or stolen from a pasture north of Arnegard in North Dakota since Jan. 2, from The Williston Herald. Read more >>

African horse sickness kills 11
Officials from the Eastern Cape veterinary services in Africa are hard at work trying to contain an outbreak of African Horse Sickness in various areas of the province, from SABC News. Read more >>

Jacksonville A to Z Week Three Begins with H for Happy Z
For the opening of Week Three, the Jacksonville A to Z, we start with the letter H. As in Happy Z, who with owner/rider Wilhelm Genn in the irons won the Lucky Sevens Welcome Classic sponsored by Ring Power, from the USEF. Read more >>

Gatlin, Fellers, Watring and Solem Capture Grand Prix Events at HITS Shows
For the second time in the past three years, Joie Gatlin captured the top prize in the annual EMO Grand Prix at the HITS Desert Circuit, from the USEF. Read more >>

USEF Develops New Customer Care Center to Better Serve the Needs of Members and Equestrian Community
As the United States Equestrian Federation’s (USEF) membership base continues to grow and the equestrian community relies more on information from the USEF, focus on customer service becomes increasingly important, from the USEF. Read more >>

Competition springs up for horse business
Twenty miles north of Columbia, Mo., and just across the Randolph County line, the Junction Development Group has proposed a $45 million mixed-use development that includes a state of the art horse venue intended to lure national and regional shows, from the Missourian. Read more >>

Horse-tending students live in barn
From the front door of senior Lauren Hawn’s building, she can see the back of Beaver Stadium. She can also see the dozen horses she lives next to at the Penn State Horse Barn, from The Daily Collegian. Read more >> 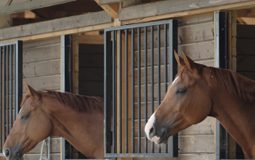