Lake, Florida’s first fatal case of Eastern equine encephalitis in a horse
A health alert is issued. Humans bitten by the infected bugs could also become ill, from the Orlando Sentinel. Read more >>

Horse-and-cart bomb kills one
A bomb strapped to a horse-drawn cart exploded in central Baghdad today, killing one person, while a car bomb killed three people north of the capital, from The Daily Telegraph. Read more >>

Thang co cooks a 5-horse meal
A Thang co festival and its featured horse meat dishes will for the first time be the focus of Bac Ha tourism’s cultural week, held between May 30 and June 2 in the northwestern province of Lao Cai in Vietnam, from VietnamNet. Read more >> 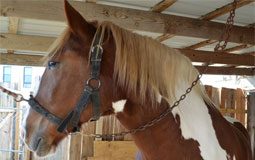